29 Jul The Origin and Formation of Diamonds – Part 1

Posted at 20:40h in History of Diamonds by lex 0 Comments 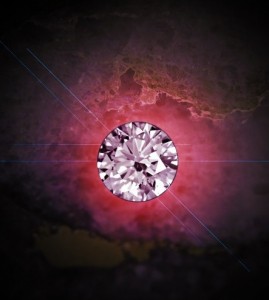 Recent scientific studies have discovered that diamonds were formed at least 990million years ago and that the oldest diamonds are as many as 4.25billion years old, thereby pre-dating the oldest forms of life on planet Earth.

Diamonds represent a ‘time capsule’ – the most beautiful of time fossils of our ever-changing, evolving planet. Diamonds are created under immense pressures, of between 45 and 60 kbars, and at temperatures of between 900 and 1300 degrees centigrade. These pressures and temperatures equate to formation depths of 125 – 200km below the Earth’s surface. They reach the Earth’s surface by the formation of Kimberlite ‘pipes’. These are feeder pipes that carry molten magma from deep within the Earth’s mantle to the egg-like shell of the Earth’s crust. The expanding molten magma, containing dissolved carbon dioxide, travels at speeds of 180km per hour and on reaching the weaker points in the Earth’s crust erupt in ‘supersonic’ explosions. At pressures and temperatures found at the Earth’s surface the diamonds are stable in crystalline form. They are found in the volcanic source rocks as ‘Primary’ deposits. When these volcanic rocks are eroded by natural agents and the diamonds deposited away from the volcanic source rock they are known as ‘Secondary’ deposits.